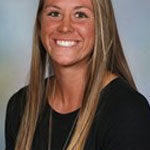 Alice Mercer is entering her second season as an assistant coach at Niagara.